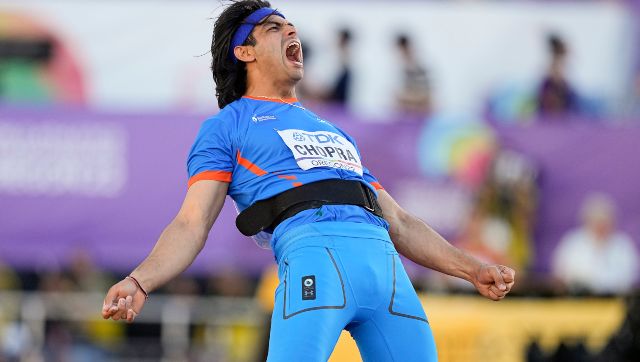 Neeraj Chopra made another history on Sunday when he became the first silver medalist from India at the World Athletics Championships.

Neeraj Chopra made another history on Sunday when he became the first silver medalist from India at the World Athletics Championships.

24-year-old Chopra clinched the historic silver medal in the javelin final with a best throw of 88.13 m. He is also the first male track and field athlete from India to win a medal at the World Championships.

Legendary long jumper Anju Bobby George was the first Indian to win a medal at a World Championships. She had won bronze at the 2003 edition in Paris.

Chopra had a nervous start to the competition. His first attempt was a foul and then he registered 82.39 m and 86.37 m throws to be fourth after the first three rounds.

His fourth attempt was the medal throw when he jumped to second place with 88.13 m and stayed there until the end. His last two attempts were also fouls.

Defending champion Anderson Peters of Grenada won gold with a best throw of 90.54 m. Bronze went to Jakub Vadlejch of the Czech Republic, who hit a throw of 88.09 m.

First ever silver medal by an Indian at a World Championships! Let that sink in in India – this boy made history once again @Neeraj_chopra1 – keep it up – keep raising the flag higher

Many congratulations @Neeraj_chopra1 for your silver around the worlds! You make us proud. Well done and best of luck for the rest of the season.

Your hard work paid off and you gave India another reason to celebrate after the Tokyo Olympics pic.twitter.com/NCWzbSNWI4

Only India’s second medal at a World Athletics Championships after Anju Bobby George’s bronze in 2003. Silver for Neeraj Chopra!! What an athlete⚡️ — Darren Caldeira (@darrencaldeira) July 24, 2022

“Neeraj Chopra is the greatest Indian athlete of all time considering what he has already achieved and the competition that exists in athletics with participants from over 200 countries,” says Anju Bobby George. @anjubobbygeorg1 @Neeraj_chopra1 @WorldAthletics

Champions are not born. They are made with sweat, toil and hard work; Guided by a dream of striving for excellence every day, our Olympic gold medalist Neeraj Chopra continues to show that our Indian athletics has made a turn. Congratulations to our champion! https://t.co/dctzGqYa04 pic.twitter.com/sTDYp6GBoH — K Annamalai (@annamalai_k) July 24, 2022

Neeraj Chopra continues to bring laurels and make the country proud! Congratulations on a historic athletic achievement and winning the silver medal in the men’s javelin throw at the World Athletics Championships. You are a true champion! — President of India (@rashtrapatibhvn) July 24, 2022