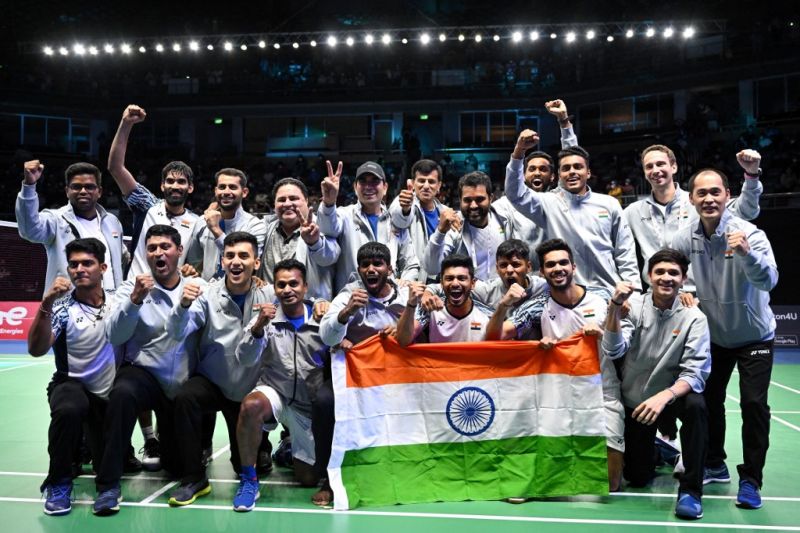 Jakarta (ANTARA) – Her daughter reached the quarterfinals of the 2022 Uber Cup, while her son caused the greatest shock in the country’s badminton history by winning the Thomas Cup for the first time.

They beat Germany and Canada 5-0 each in the group stage, but despite losing 3-2 to Taiwan in the final group stage, they beat Malaysia and Denmark 3-2 in a row and Indonesia 3-0. who are all traditional forces of world badminton, in the Quarterfinals, Semifinals and Finals respectively.

A high point for India, a disappointment for Indonesia despite being illegal to overrule the hard and heroic struggles of Anthony Ginting, Mohammad Aksan/Kevin Sanjaya and Jonatan Christie.

In the past, India has produced legends like Prakash Padukone and Pullela Gopichand, both of whom have won the All England.

There’s more, but while the number of successful Indian badminton players is still outnumbered by traditional world badminton powerhouses like Indonesia, what they accomplished this year by winning the Thomas Cup was truly special, far more than sweet.

But Indian badminton is not as vibrant as it has been for the last twelve years. On the other hand, there were difficult times when both the public and the media in this country were not really interested in this sport because they were probably more interested in sports like cricket, kabaddi and hockey.

In the late 1990s, Pullela Gopichand’s mother, Subbaravaramma, made great efforts to help her son get widespread newspaper and television coverage. But that never happened, despite Gopichand winning the All-England title in 2001.

However, when Gopichand became the head coach of the Indian national badminton team, the face of Indian badminton slowly but surely changed to what it is today. Not only does the performance of athletes continue to increase, but so does the popularity of badminton in the subcontinent.

Gopichand referred to the initiative of LV Subramanyam (Deputy Chairman of Andhra Pradesh Authority for Sport (SAAP), which became the crater of Candra at the forefront of Indian sport that produced stars of cricket, badminton and others) to organize world-class tournaments in India , to popularize badminton in the country.

“His (LV Subramanyam) foresight helped us introduce badminton more broadly,” Gopichand said, as quoted by the Times of India.

Badminton has grown in popularity in India after Saina Nehwal and PV Shindu have enjoyed success in the last three Olympics.

Aside from being head coach, Gopichand worked tirelessly in the search for tournament sponsors. He was used to staying up late just to prepare to successfully run a tournament.

Gopichand’s efforts paid off. Widespread support from sponsors has seen competitions take place more frequently and eventually badminton’s popularity has increased to the point that every time an Indian athlete wins a tournament there is a social media uproar.

The badminton academy or coaching system that keeps producing athletes who love to show off, including the 2022 Thomas Cup winners, along with increasingly frequent competitions, rising popularity and sponsorship support that boost performance motivation through big prizes indian badminton making progress.

The prize money is increasing with every tournament and as a result, Indian Badminton is becoming more accepted by the public which ultimately pushes this sport forward from time to time.

This success also shows that India has a fairly complete lineup of players who can challenge the dominance of Indonesia and other world powers in men’s badminton.

This richer formation provides India with a fairly varied inventory that allows them to fill big badminton tournaments with the opportunity to achieve the best results.

On the other hand, India’s success in winning the Thomas Cup is an alarm for Indonesia and other world powers in badminton.

The fact that they were able to beat the top two Indonesian men’s singles in the Thomas Cup final shows that they can pull off similar upsets in badminton tournaments, including the Paris Olympics, where badminton is probably Indonesia’s mainstay in upholding the Olympic gold tradition will be.

However, India’s methodical and evolutionary approach to badminton education, including Pullela Gopichand’s determination and vision, is a sign that the power of badminton is so widespread.

For Indonesia itself, prior to the power shifts, a thorough assessment must be made immediately. It’s not that the current lineup of players isn’t good, they even need to be commended and appreciated, but new faces in other regions like India have found another new formula that threatens our dominance.