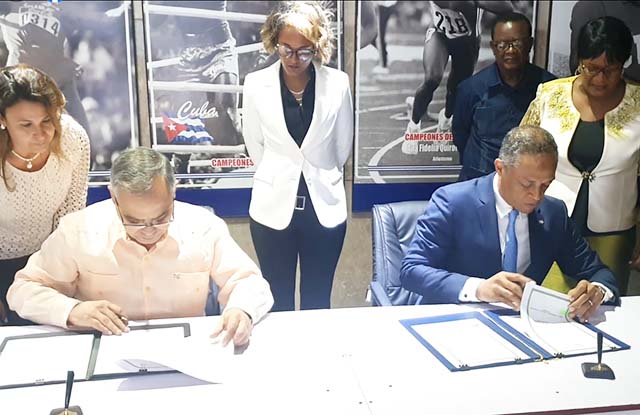 The Gabonese Sports Minister signed a cooperation agreement with his Cuban counterpart on June 17 in Havana for the training and development of elite athletes, particularly with a view to the 2024 Olympic Games (OG) in Paris.

Signing of the partnership agreement between Franck Nguema and his Cuban counterpart Osvaldo Vento Montiler on June 17, 2022 in Havana. ©Facebook

It couldn’t be otherwise. Impressed by the Cuban sports experience, the Gabonese Sports Minister signed a cooperation agreement with his Cuban counterpart in Havana on June 17th. This includes ensuring the education and training of top athletes, the training of technical supervisors and administrative staff, the retraining of athletes, etc. with a view to the Olympic Games (OG) 2024 and 2028.

“This bilateral cooperation agreement between Cuba and Gabon is part of the mission to realize the vision of the President of the Republic, Ali Bongo Ondimba: Gabon, sporting nation that wins”, said Franck Nguema. Cuba is the only developing country to feature in the top 15 in the world Olympic medal rankings, well ahead of big countries like India and Argentina. This Caribbean country has won no less than 15 medals at the last Olympic Games (OG) in Tokyo (so far), including 7 gold medals.