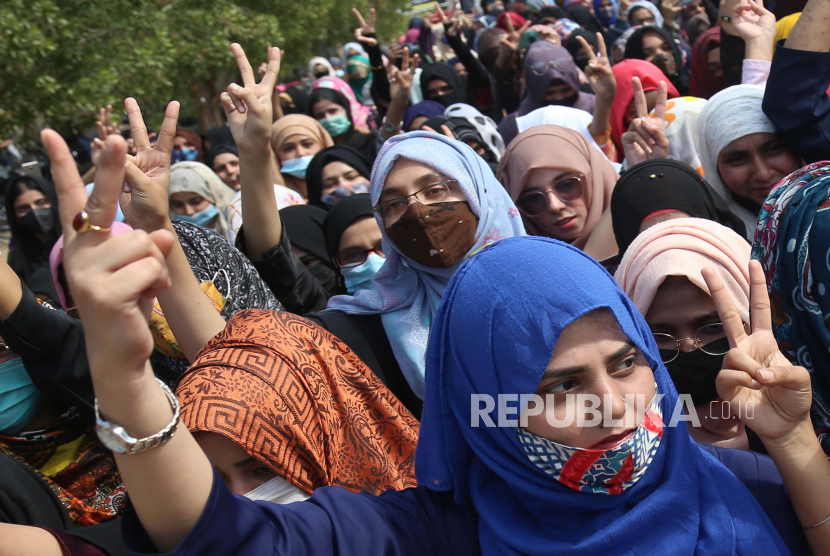 Colleges in India will reopen on Wednesday

REPUBLIC.CO.ID, NEW DELHI – Mostly Indian muslim student refuses to remove the headscarf before entering classes at several pre-university colleges in Karnataka state. Press Trust of India reported that female students in the city of Shivamogga refused to remove their headscarves and preferred not to attend classes.


Colleges in India reopened on Wednesday after being closed for a week over a row over a headscarf ban. Video footage shared on social media shows female students at various universities in Karnataka being asked to remove their headscarves before entering class. Most reject this.


Last week, the Karnataka High Court ruled to ban high school students from wearing religious dress pending a final decision on the matter. Since Monday (February 14, 2022), a three-person committee has been dealing with the case of the hijab ban to decide whether schools and universities can order students to remove the headscarf in classrooms.


Karnataka Chief Minister Basavraj Bommai said the court order applies to institutions that have a dress code. “The order does not apply in a place where there is no dress code,” he said, quoted by Anadolu Agency, Thursday (2/17/2022).


A group of Muslim women petitioned against a government order banning headscarves on campus. The row over the hijab ban erupted after a college in Karnataka asked students to remove their headscarves in class.


Those who protested cited the constitution, which allows Native Americans to wear clothing of their choice and display religious symbols.


According to the constitution, every citizen has the right to practice, profess and spread his or her religion. Rights can only be restricted on the basis of public order, morals and health.


The Organization of Islamic Cooperation (OIC) expressed deep concern over the hijab controversy in India. According to the OIC, the hijab ban is a form of Muslim genocide by right-wing Hindu groups in India. The OIC urges international bodies, particularly the United Nations, to take the necessary action on this issue.


India has criticized the OIC’s statement on the hijab ban. Foreign Ministry spokesman Arindam Bagchi said the OIC had been infiltrated by interest groups to advance malicious propaganda against India.


“The issues in India are being considered and resolved according to our constitutional framework and mechanisms, as well as ethos and democratic governance,” Baghci said.