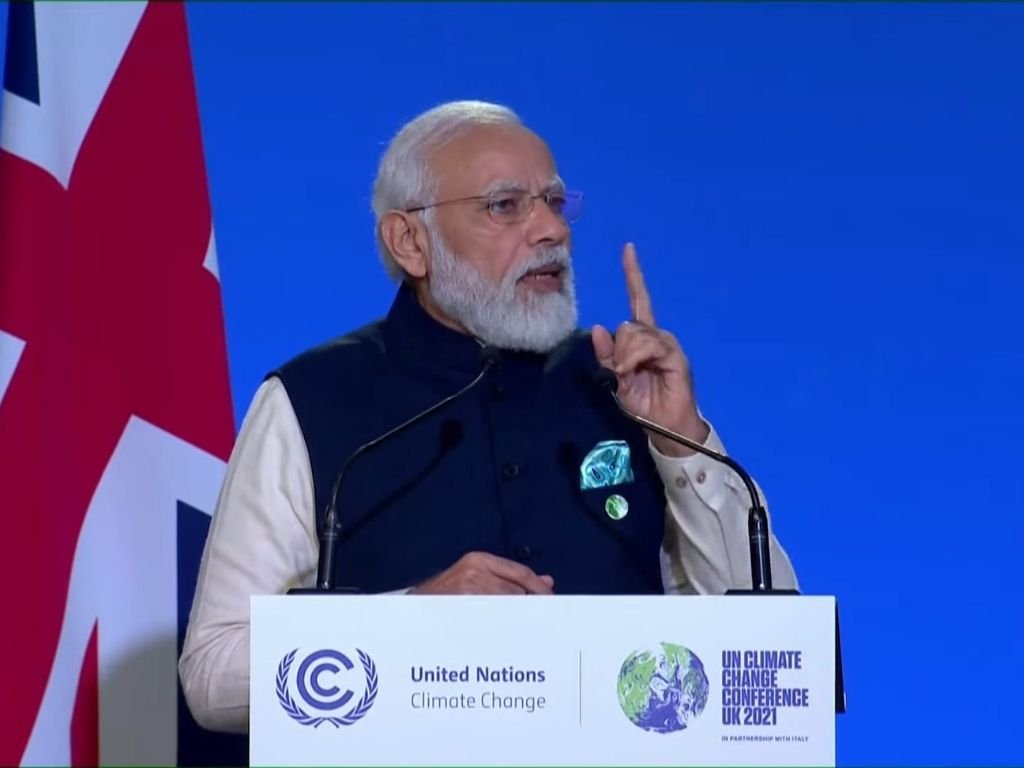 India has set a target of achieving carbon neutrality by 2070, Indian Prime Minister Narendra Modi announced in Glasgow on Monday. “By 2070, India will reach net-zero emissions” emissions, he said in a speech the day after the COP26 climate change conference opened in the UK.

The announcement of new climate targets for India, the world’s fourth largest emitter of greenhouse gases after China, the United States and the European Union, was eagerly awaited. COP26 President Alok Sharma thanked Narendra Modi for his climate commitment to enable a 1.5 degree future. The Indian Prime Minister has set further goals to combat global warming.

So India will increase by 2030 “its non-fossil energy capacities” from 50 gigawatts (GW) to 500 GW and will meet 50% of its energy needs from renewable sources by the same year. “By 2030, India will reduce the carbon intensity of its economy by 45%”, also said Narendra Modi. The country will thus increase its initial pledges to reduce CO2 emissions as a percentage of GDP by 10 points compared to 2005 levels. “With a target of 500GW of non-fossil fuel capacity, India will not need to build new coal plants”.

Dave Jones, global head of the association, relies on this promise Ember climate warns, however, that these net-zero ambitions must “convert into short-term coal actions”. “Not trading on coal will undermine the credibility of net zero commitments. » he added. But among the reactions from the scientific community, Narendra Modi’s dedication has been praised. “India has clearly put the ball in the developed world’s court. That is real climate protection.” for example welcomed Arunabha Ghosh, CEO of the Council for Energy, Environment and Water (CEEW).

In the area of ​​transport, the Indian Prime Minister gave a figure as an example. “Every year, more passengers than the world’s population use the Indian rail network. This massive railway system has set a goal of becoming carbon neutral by 2030, an initiative that will reduce emissions by 60 million tons per year.”. The program ” LED light bulb the country reduced annual emissions by 40 million tons, he said. The Paris Agreement at the end of COP21 in 2015 mentioned the goal of“equilibrium” between emissions and absorption of greenhouse gases “in the second half of the century”.

Under pressure from the UN, more and more countries are committing to this CO2 neutrality, most by 2050, a few by 2060 or 2045. A goal that India is also eagerly awaiting. “India is right to demand climate justice and calls on developed countries to keep their promise to provide technology transfer and finance“, recalls Vibhuti Garg, an economist at the Institute for Energy Economics and Financial Analysis (IEEFAs). To meet its commitments, India expects significant climate finance. ” The country will monitor not only climate protection, but also climate financesaid Arunabha Ghosh. India again called for a lifestyle change. If we don’t change the way we live, we won’t be able to improve life on this planet“.