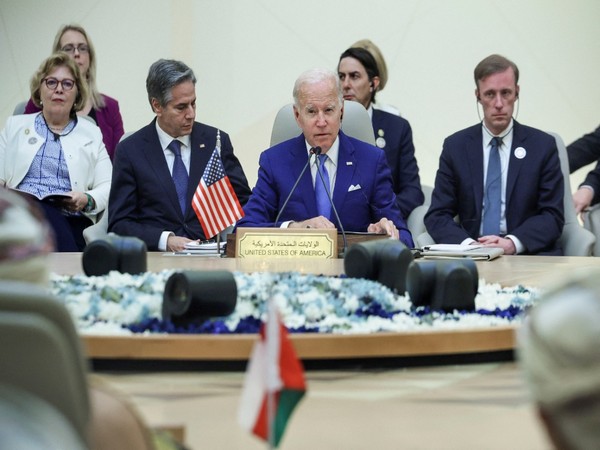 Jeddah [Saudi Arabia]JULY 17 (ANI): US President Joe Biden on Saturday (local time) welcomed the UAE’s economic initiatives, including its recently signed free trade agreements with various countries including India.
According to the White House statement, President Biden and the President of the United Arab Emirates, Sheikh Mohamed bin Zayed Al Nahyan, met in Jeddah on Saturday (local time) for a bilateral meeting during the United States-Gulf Cooperation Council (GCC) Summit and Egypt, Iraq, and Jordan.
“He welcomed the UAE’s economic initiatives across the Middle East and beyond, including FTAs ​​recently signed with Israel, India and Indonesia, as well as new investments in Jordan and Egypt,” the White House said in a statement.
The UAE signed three trade deals this year – one each with Indonesia, India and Israel.
President Biden recognized the UAE’s efforts to strengthen its policies and enforcement mechanisms in the fight against financial crime and illicit cash flows. Both heads of state highlighted the extensive and enduring educational, cultural and health partnerships between the two countries.
President Biden offered his personal condolences to President Sheikh Mohamed bin Zayed and all Emiratis on the loss of His Highness Sheikh Khalifa bin Zayed al Nahyan.
He congratulated the President of the United Arab Emirates on his recent election as President and presented him with an invitation to visit the United States later this year.

Leaders during the United States and Gulf Cooperation Council (GCC) summit, as well as leaders of Egypt, Iraq and Jordan discussed a number of regional and global opportunities and challenges that require close coordination between the United States and the UAE and are strategic Partners, was the explanation.
On regional diplomacy, Biden expressed his appreciation for the UAE President’s personal leadership in breaking down barriers and establishing diplomatic ties with Israel, as well as deepening cooperation with other countries in the region.
Both leaders discussed the US role in helping to establish new economic, trade and people-to-people ties between Israel, the United Arab Emirates, Bahrain and Morocco, as well as deepening ties between these states and Egypt and Jordan through new ones As part of the cooperation, was the statement from the White House.
“In the defense sphere, the two leaders reaffirmed their commitment to deepening comprehensive security cooperation, which has made both countries safer and has made important contributions to regional peace and stability,” she added.
The US President again pledged to support the UAE’s defenses against terrorists and other hostile acts such as the January 2022 attacks on civilian sites in the UAE.
“In terms of economy, trade and trade relations, President Biden noted that the UAE is one of the fastest growing US economic partnerships in the world, the largest US trading partner in the Middle East and a significant investor in the US economy,” it said read in the statement.
Biden also hailed the UAE’s long-standing commitment to global energy security as a reliable and responsible supplier, and recognized its leading role in promoting climate action, the energy transition and the development of clean energy technologies.
President Sheikh Mohamed bin Zayed presented President Biden with an invitation to attend the COP28, to be convened in November 2023 in the UAE. (ANI)