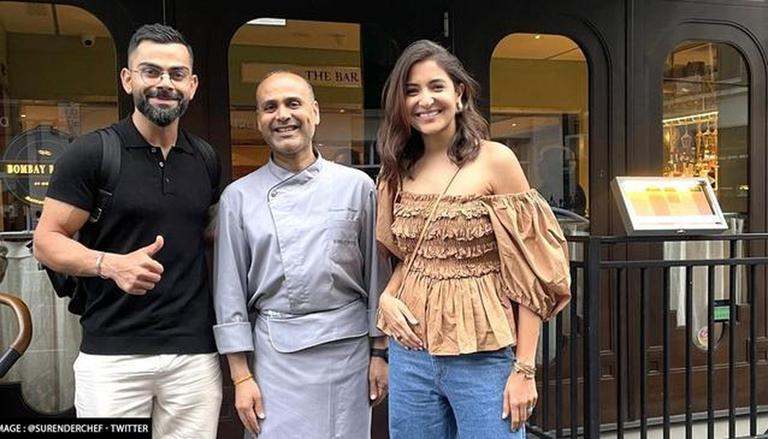 Anushka Sharma and her cricketer husband Virat Kohli have treated fans to adorable glimpses from their holiday and were recently spotted eating at an Indian restaurant in London. The Mumbai-based restaurant called BombayBustle hosted the celebrity couple, and the outlet’s chef Surender Mohan heaped praise on them.

The chef dropped a picture alongside Anushka and Virat and said he was “happy and honored” to have hosted them. He also highlighted the couple’s “wonderfully warm” aura, calling them the “pride of India.”

On Monday, July 25, Surender Mohan shared a picture of him posing with Anushka and Virat outside the restaurant on his Twitter account. While the actor was seen in a ruffled off-the-shoulder top paired with jeans and trainers, the former Indian captain wore a black polo shirt with white pants and trainers. In the caption, the chef mentioned, “Happy and honored that @imVkohli and @AnushkaSharma dined with us @BombayBustle so wonderfully warm and proud of India.”

Anushka previously posted pictures of her delicious croissants during her time in Paris. In the candid clicks shared on her Instagram handle is the Rab Ne Bana di Jodi Star looked gorgeous as she held a croissant and a cup of coffee in her bathrobe. Under the post, she wrote, “When in Paris…eat lots of croissants.” Responding to her post via the comments section, Priyanka Chopra quipped, “Send me something in London. Thanks and Greetings.”

The actor will star in Prosit Roy’s upcoming movie chakda xpress, chronicling the journey of former Indian cricket captain Jhulan Goswami. The 34-year-old recently finalized the first schedule of the biopic, which will premiere on OTT platform Netflix. The actress also co-produced the project with her brother Karnesh Sharma through their Clean Slate Filmz banner before stepping down from production responsibilities. Anushka was last seen in the 2018 film Zero. Virat, on the other hand, represented India in the recent series against England.