Airbus flies its technology demonstrator based on the C295 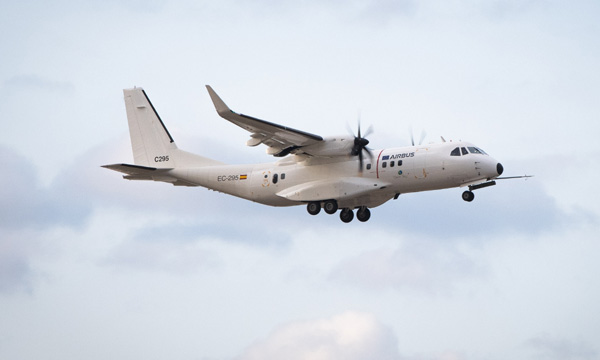 Airbus conducted the maiden flight of the C295 Flight Test Bed 2 (FTB2) from Sville as part of the European research programs CleanSky 2 and Horizon 2020.

In particular, the test campaign will make it possible to test a new high-performance semi-morph wing equipped with new winglets. In addition, a satellite communications antenna was integrated into the fuselage of the aircraft.

The demonstrator is also equipped with a new flight control system that allows the primary control surfaces (ailerons, flaps, flaps) to self-adjust in flight. It relies on digital control systems that optimize the aerodynamic shape of the wing in flight. The multifunctional flap has been redesigned and includes flap tabs in the trailing edge controlled by electromechanical actuators.

This technological demonstrator also includes new materials (such as Scalmalloy alloy) and new technologies that will allow to reduce the noise and emissions of the future multi-role regional aircraft, which the CleanSky 2 program wants to achieve (-43% for CO2 and – 70% for NOx in a typical search and rescue mission).

Eventually, new assembly methods were introduced. A one-shot mounting approach was used for the winglet and its composite tab, moving away from the traditional rib approach in favor of an integrated multi-spar torsion box.