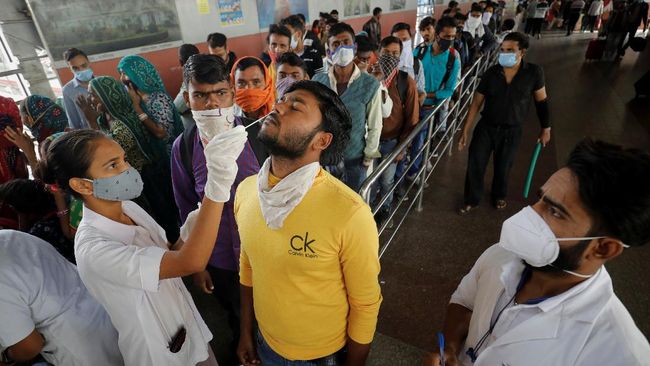 India is predicted to break new daily Covid-19 case record due to invasion of Omicron variant which defeated Delta.

The Indian Ministry of Health also reported another 302 new deaths.

“We will really break our record very soon and be at the peak of the (Covid-19) wave in early February,” former director of the National Institute of Epidemiology MD Gupte told Reuters.

“Given the size of our population, we will be reporting more cases per day than in the United States. But what we’re seeing right now is that the cases are a lot lighter, so hospitalizations and oxygen and everything that’s needed don’t have to go up anymore,” he said.

In addition, Gupte said the high rate of infection when the Covid-19 wave hit in April and May, as well as vaccinations, had reduced the severity in India.

This policy was made taking into account cases that have arisen in other countries such as the United States. Uncle Sam has over a million extra cases every day.

Citing Reuters, nearly 70 percent of Indians contracted the coronavirus in the middle of last year.

Health officials in the city of New Delhi and Maharashtra state said hospitals and COVID-19 testing infrastructure have not been under pressure as many people are being treated at home.

Although many people in Mumbai have tested positive, far fewer people need this treatment.

The city recorded 20,181 new infections as of Thursday, well above the previous peak of 11,000 last year.

“The demand for oxygen is not increasing in line with the increase in cases. At the moment there are no plans for a lockdown. If necessary, we can tighten the restrictions,” he said.

Maharashtra itself has closed schools and universities, and has also restricted visitors to cinemas, weddings and more.

Authorities also imposed weekday curfews, closed schools and ordered most businesses to open every other day when there were no curfews.